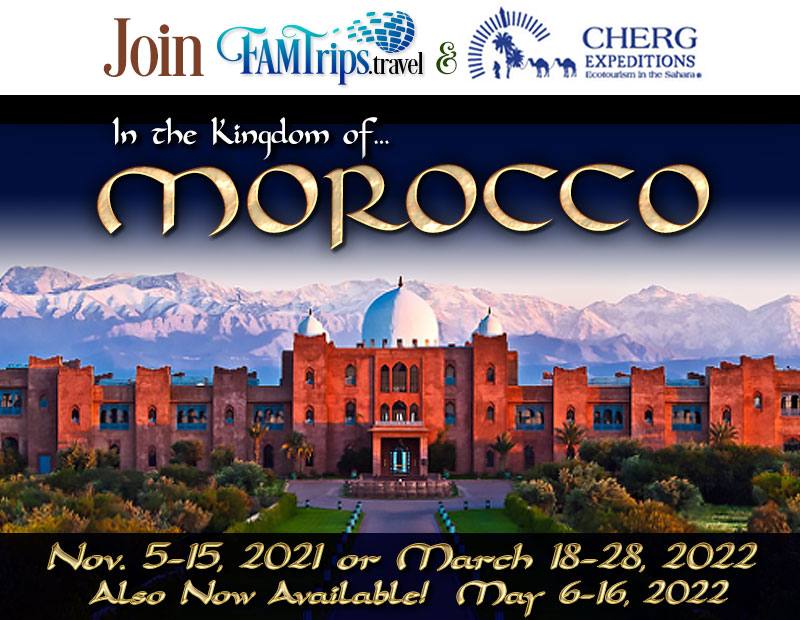 On arrival at the Casablanca Airport, meet your escort for 1 of the 2 group transfers offered through FamTrips from the Casablanca Airport to your hotel. Self-transfers or other transfers can be arranged depending on your arrival time. Casablanca, Morocco’s largest Imperial city, principal port, and economic capital, boasts one of the most extensive and diverse displays of art deco architecture in the world. Relax at your hotel or take an optional trip to the famous Rick’s Café and Restaurant on your own for music, drinks or appetizers. Rick’s, originally conceived and developed by a former commercial counselor for the US Embassy in Morocco, opened in 2004 as a theme project and has become an iconic stop for tourists while in Casablanca. Return to your hotel for a Welcome Reception and overnight in Casablanca (Hotel Radisson Blu Casablanca). (Welcome Reception & Tapas)

After a traditional breakfast, depart via the Atlantic coast through Rabat, the current and financial capital of Morocco and an important Imperial city. Rabat is known for sites that illustrate Morocco’s Islamic and French colonial heritage. Visit the old town of Rabat, called Oudayas and Kasbah Oudaya, located adjacent to the Rabat medina at the mouth of the Bou Regreg river opposite Sale, a royal fort of the Berber era surrounded by formal Andalusian gardens overlooking the Atlantic Ocean. Visit Hassan Tower and the Mohamed V Mausoleum, a perfectly preserved example of the architectural style of the Alawite dynasty and explore the chellah or sacred necropolis. Continue through Kenitra, have lunch along the way and continue to the “blue city” of Chefchaouen, a sleepy village in the heart of the Rif Mountains noted as one of the 50 most beautiful places in the world. Arrive at your guesthouse in Chefchaouen in late afternoon before dinner on your own at one of the many charming restaurants in Chefchaouen and relax before dinner and the night at your guesthouse (Puerta Azul). (B, D)

After a traditional breakfast, take a walking tour of Chefchaouen; visit the Grand Mosque and Plaza Uta el-Hammam. Depart for Fes, via Meknes, (known as the “Versailles of Morocco”), one of the most important Imperial cities of Morocco under Sultan Moulay Ismail. Visit the Roman ruins of Voulibilis, declared a UNESCO World Heritage Site and filming location for Scorsese’s The Last Temptation of Christ. Spread out across several acres, the ruins reveal the transformation of the Roman Empire Carthaginian settlement from a Berber village into a typical Roman city devoted to the Roman gods. Stop for lunch in Meknes, known for sites that illustrate both Islamic and French colonial heritage, and visit the triumphant arch of Bab Mansour, argued to be the most beautiful in Morocco. Wander Place el Hedime (Square of Ruins) which links the medina and the kasbah, lined with modern residential buildings and a covered souk. Continue to your riad in Fes for dinner and the night. (Palais Amani). (B, D)

After a traditional breakfast, enjoy a free day in Fes for relaxation (with yoga, spa, massage or traditional hammam) or visit the cultural capital of Morocco. Fes, founded in the 8th century by Moulay Idriss II, is known for the fortified medina of Fez El Bali and is one of the largest preserved medieval sites in the world and UNESCO World Heritage Site, with medieval architecture, lively souks and old-fashioned atmosphere. Explore the religious schools of the medina, such as the Medersas Bou Inania and Al Attarine, one of the most beautiful Koranic schools in Fes, dating back to the 14th century, both decorated with carved cedar panels and delicate mosaics. Have lunch along the way and discover historic mosques, picturesque gates, a traditional Moroccan tile (jelliz) factory, and the city’s distinctive and colorful tanneries and leather souk. Enjoy a cultural night out at Kassr Annoujoum including a concert of contemporary Andalusian music followed by a “Thousand and One Nights”, culinary session of traditional Moroccan cuisine. Return to your riad for the night. (Palais Amani).  (B, D)

After a traditional breakfast, depart for Midelt situated in the high plains surrounding the Mlouya River, between the Middle and High Atlas Mountain ranges. Enjoy a trip to the natural forest area near Ifran and Imouzar. Trek the cedar forests with century-old trees and enjoy watching Barbary macaques of Gibraltar. Stop at El Karma Couscous and participate in a cooking class to learn how to make hand-rolled couscous, which has been a part of Moroccan tradition for centuries and stay for lunch of your homemade couscous. Continue to your guesthouse in Midelt and relax before a traditional Moroccan dinner and the night (Ksar Timnay).  (B, L, D)

After a traditional breakfast, depart to Merzouga via the villages of Er Rachidia and Erfoud, through Tizi Ntalghomt and the Ziz Valley. Stop for lunch in Er Rachidia, one of Morocco’s most ancient and famous cities, known as the date capital of Morocco. Visit Musee des Sources de Lalla Mimouna and discover the Saharan heritage and culture of Er Rachidia.  Meet your cameleers who will guide you to your desert camp for sunset over the dunes of Erg Chebbi. Enjoy a desert dinner followed by traditional Saharan music around the campfire and night in luxury tents (Orient Desert Camp). (B, D)

After watching sunrise over the dunes, and a traditional breakfast, depart for Ouarzazate via the village of Rissani, crossing the Tafilalet and vast mineral Massif Bougafer to reach Alnif. On to Ouarzazate through the Draa Valley oasis (the largest and longest oasis in the world), and through Tansikht and the village of Agdz. Stop at an ecolodge near Agdz for an ecotour and lunch. Continue to Ouarzazate to arrive at your luxury riad in the late afternoon and relax by the pool or receive a traditional henna application before a traditional Moroccan dinner and the night (Oz Palace). (B, L, D) 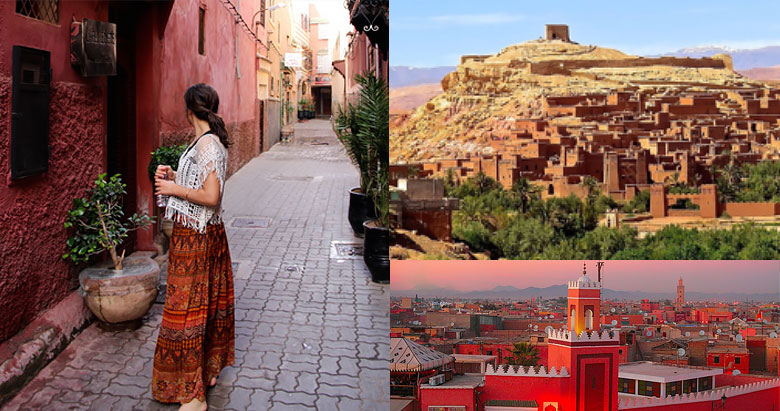 After a traditional breakfast, depart early morning for Marrakech another Imperial city of Morocco, known as “the Red City”. Visit the stunning Ait Ben Haddou Kasbah, a UNESCO World Heritage Site for a photo opportunity. Continue through the Ounila Valley, a part of the main caravan route from sub-Saharan Africa to Marrakech. Visit the famous Kasbah Telouet, one of the former residences of Pacha Glaoui and location of some of the best preserved kasbah architecture in Morocco (stucco, jelliz (tile) and cedar). Have lunch in Telouet and continue through the High Atlas Mountain pass of Tizi-n-Tichka. Continue to your boutique hotel and relax before dinner and the night (2Ciels Boutique Hotel). (B, L, D)

After a traditional breakfast, visit Jardins Marjorelle, built by the painter Jacques Marjorelle, and the former home of Yves Saint Laurent, and its spectacular Berber museum; visit the Saadian Tombs, Bahia Palace and Medersa Ben Youssef (just reopened after a 3-year renovation project) to learn about Moorish architecture. Stop for lunch along the way and set off to explore the local culture via a tour of the daily life of Moroccan people through a “behind the doors” tour: a visit to a communal bakery, walk through a local food market, visit a traditional hammam and visit a fondouk, an historic trading place for merchants from across North Africa. Take in the sites at Jemma el Fna, a UNESCO World Heritage Site, which for centuries has been an incredible world of native theater: snakes, musicians, dancers, storytellers, and fortune-tellers. Stop for dinner and return to your hotel for the night (2Ciels Boutique Hotel). (B, L)

After a traditional breakfast, depart for Casablanca. Explore the most emblematic points of Casablanca: the Hassan II Mosque, the second largest mosque in the world including a minaret 690 feet high and is one of the few mosques open to non-Muslims. Visit the Boulevard de la Corniche and stop for lunch to feast on fresh fish from the sea. Tour the district of Habous quarter including Mahkama du Pacha, the former home of the Pacha now an administrative building, and the Royal Palace. Dinner on your own at one of the many fine restaurants in Casablanca and return to your boutique hotel for the night (Suite Hotel Casa Diamond). (B) 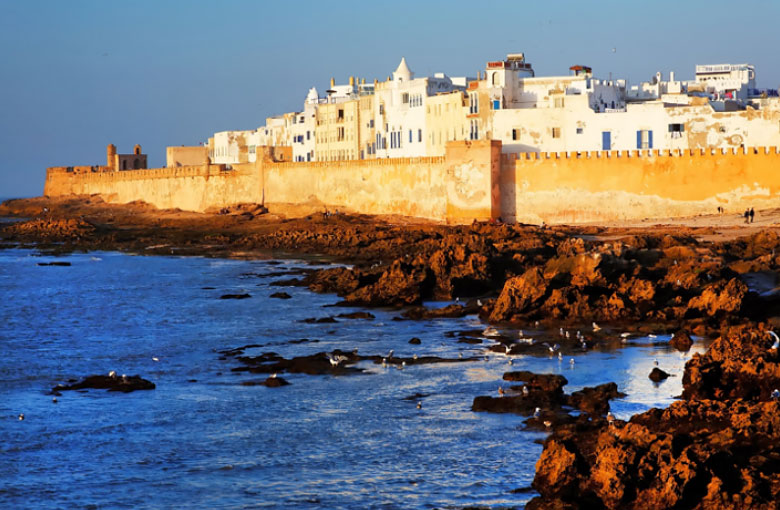 After a traditional breakfast, relax by the pool before transferring through FamTrips to the Casablanca Airport for your return flight to the U.S. Self-transfers or other transfers can be arranged depending on your departure time. (B) 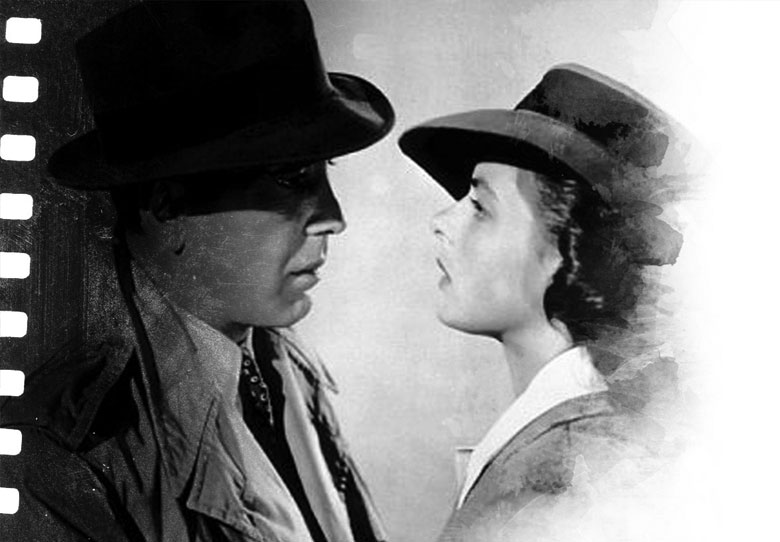